Did you see Carol and Angels Sewing and Quilting featured in the September edition of Business NH Magazine?


The article highlights Carol's journey and how she came to own Angels Sewing and Quilting. More recently, Angels Sewing became the exclusive New Hampshire dealership for Juki's sewing machine line.

Below is an excerpt from the article originally appearing in Business NH Magazine in September 2021. Click here to download a print-friendly PDF of this article.

During the pandemic, people adopted new hobbies, from cooking to sewing. Carol Lawrence, co-owner of Red Arrow Diner, decided she would buy a sewing business.

Like many restaurants, Red Arrow instituted outdoor dining and online ordering to keep the nearly 100-year-old iconic diner's four locations in Manchester, Concord, Londonderry, and Nashua afloat. (Nashua was launched amid the pandemic.) "We all came together," she says.

To help stave off stress, Lawrence turned to sewing, which she'd taken up six years ago. She took several online classes. Then, in September, Angels Sewing and Quilting in Salem, sent a newsletter stating the owner wanted to sell the business because of health issues.

Despite everything she had on her plate, Lawrence couldn't stop thinking about the opportunity. By October, she was the new owner.

The store offers classes and sells fabric and the latest machines. Lawrence also became the exclusive NH dealership for Juki's sewing machine line, which enables industrial-level straight stitching on heavy duty fabric, such as canvas tote bags. And those who love to sew have spent big bucks during the pandemic. Keeping inventory was nearly impossible as machines that cost less than $2,000 were snatched up as soon as they came in the door, Lawrence says, adding only recently has she been able to get ahead of demand.

Lawrence also increased the store's stock of fabric, including bringing in her personal favorite, Tula Pink. She is also increasing in-person and online events and classes. "I set up a studio. I do demos. We have a YouTube channel," says Lawrence, who demonstrates making handbags and other projects. The store provides free lessons to anyone who buys a new sewing machine.

There are now seven employees as well as the previous owner, Laura Engle. "The women who work here love to sew. Coming in here is like going to Disney every day," Lawrence says. "I am literally living the dream. This is a new chapter." 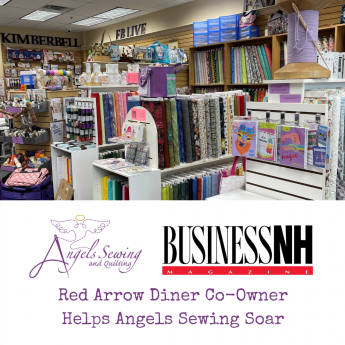